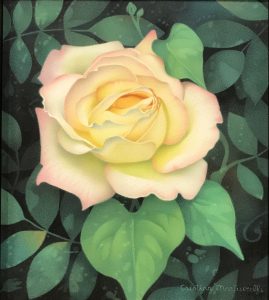 Her talent was inherited from her mother and recognized early. By second grade, she was already trying to depict dimension in the people she drew, and by fifth grade she was spending school recesses creating bulletin boards for her teacher. But artist Cristina Martuccelli did not achieve success by talent alone.

As a teenager, Martuccelli devoted herself to pastels. Then her father presented her with a set of rapidograph pens, and she experimented pointillism, cross-hatching and illustration. In college, she took up a set of gauche watercolors given to her as a gift and began the work she is known for today.

After graduation from the University of Rhode Island in 1977 with a BFA, Martuccelli devoted her talents to her paintings. An early subject, the fish, has become a trademark, and her work combines anatomical precision with the ephemeral quality of the water world. Using her camera to isolate the detail of architectural subjects, Martuccelli has also painted studies of the doors and windows and angles that make up our more grounded lives. An occasional flower piece, as well as views of farm machinery, round out her repertoire.

Painting is a consuming activity for Martuccelli; each effort is a process of discovery and revision. This focus has resulted in significant local recognition. A member of the Rhode Island Watercolor Society and the Providence Art Club, Martuccelli has been exhibited at various galleries. She has worked as an artist in the advertising department of a major city newspaper since 1980.